Only FIPS 140-2 compliant solutions may be deployed to work with federal government departments that collect, store, transfer, share and disseminate sensitive but unclassified (SBU) information. 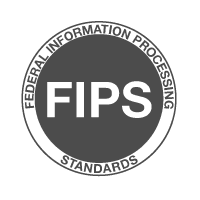 GoSilent deploys AES 256-bit encryption to protect sensitive data via dual tunnel, end-to-end encryption. Data never gets stored on an intermediary server, and no extra keys are ever generated.

The outer tunnel of a dual tunnel VPN refers to the components that terminate the outer layer of encryption.

GoSilent utilizes AES 256-bit encryption for the outer tunnel to protect your private data and keeps it fully encrypted end-to-end. Data is never stored on an intermediary server. In keeping with Top Secret level encryption standards, there are no extra keys. Attila Security does not record, copy or have access to the encryption codes. This means that your data remains secure, even if compromised.

Learn more about the FIPS security standards for cryptographic modules.

Learn more about the CNSA encryption suite on the NSA website.

What does FIPS Certification Mean?

A 6-9 month process, claims must be tested by a NIST accredited independent laboratory.

AES 256-bit end-to-end encryption is the most secure solution in the marketplace.

Data is never stored on an intermediary server. No record, copy or access to encryption codes.

Is FIPS Compliant the same as FIPS Certified?

During FIPS certification, the file transfer software and client and server applications are each independently tested to confirm they meet FIPS standards and are also checked for security vulnerabilities, predictable number generation and reckless disposal of keys.

We can help! Our team of experts has configured hundreds of solutions for organizations from throughout the globe. Let us help you make security simple.